A Conversation With Deborah Piccurelli

Deborah Piccurelli enjoys reading and writing romantic books. She has authored three novels and writes a fiction column for Book Fun Magazine. She is a member of American Christian Fiction Writers and is an advocate for sanctity of life. Deborah lives in New Jersey with her husband and two sons.

Deborah: Even as a child, I always liked reading books that had an air of mystery or suspense to them. Then as I grew older, romance came into play, and so I almost always like to have an element of that to whatever I read. That being the case, it was only natural to write what I enjoyed reading the most.

What’s the weirdest way someone has died or been killed in your novels?
Deborah: I can’t really say anyone has in my novels has ever died in a weird way, but there was an unconventional attempted murder in my very first novel, In the Midst of Deceit, when someone had tried to kill the hero through skydiving.

What did you want to be as a child (and did that dream come true)?
Deborah: Probably most authors wanted to be writers from when they were young, and I had tried writing books a couple times as a child, but that wasn’t my dream back then. Don’t laugh, but my dream as a young girl was to be a secretary. I would watch movies or TV shows where some of the women characters worked in an office and that looked so glamorous to me. That dream never changed as I grew up and it did actually come true. Most of my secretarial career was in legal work, which helped provide some material for my subsequent career as a writer. Oh, and learning to type was bonus! 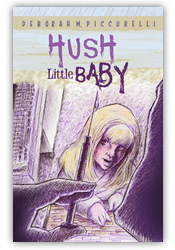 Hired by the doctor responsible for her twin sister’s death, investigative reporter Amber Blake goes undercover to expose him for the crime of fetal harvesting.