A Conversation With Lillian Duncan

Lillian Duncan writes the types of books she loves to read—fast-paced romantic suspense and mystery that demonstrates God’s love for us. After more than 30 years working as a speech pathologist for children, she believes in the power of words to transform lives, especially God’s Word.

Where do you get the inspiration for your plots?
Lillian: From all sorts of places. Sometimes, I come up with a premise, such as what would happen if a big city lawyer fell in love with a farmer? (Pursued) Sometimes a scene just pops in my head from nowhere, such as when a woman receives a phone call from a young girl asking for her aunt and she knows it can’t be for her because she doesn’t have a niece. Or does she? (Deception)

Sometimes a story comes about because of characters from another story. My Deadly Communications series happened when my writing life crashed into my other life as a speech pathologist. The series features a speech pathologist who gets way too involved with her clients!

So, like I said my story ideas can come from anywhere at any time. Game On is no exception: I got it from watching a TV talk show of all things. Of course, all I got from the show was a germ of an idea, the rest was up to me!

How do you pick the location/setting of your romantic suspense novels?
Lillian: Since I live in Ohio, most of my stories start out in Ohio, either in a real location like Cleveland or a fictitious one like Serenity Springs. But my characters are usually running from someone or chasing someone, so the story usually moves to somewhere I’ve traveled before, like the Bahamas or Jackson Hole, Wyoming.

Game On is an exception. It starts out in Washington, D.C., a place I’ve visited numerous times, then moves on to Florida and North Carolina. I lived in Florida for a short time when I was younger as well as visited it several times, and my husband and I were spending a month in North Carolina as I wrote Game On.

If the character ends up in a location I’m not familiar with, such as San Francisco in Deception, I’ll do a lot of research on the Internet as well as ask questions on my writer loops. 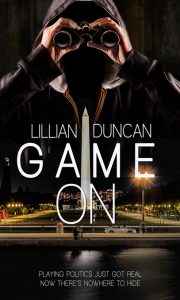 Current book: Game On
Nikki Kent makes a living discovering other people’s secrets, but she has one of her own. When Lucas McMann shows up needing help, she wants to refuse. Her new-found faith won’t let her—even if he was the first man to break her heart!

Lillian’s Giveaway:
To celebrate the release of Game On, Lillian is giving away a virtual basket of goodies at www.lillian-duncan.com that including Amazon gift cards. For all the details go to my blog, Tiaras & Tennis Shoes. Simply leave a comment on the blog post Game On, and you’ll be entered.