Multi-published author MaryAnn Diorio recently stopped by my blog to share some about her writing life. 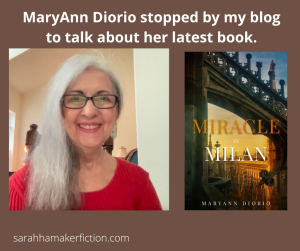 The first step I took was to establish my priorities by asking myself these questions:

Since God called me to write for Him, writing is in my top five priorities. So, I make it a point to schedule writing time at least five, often six days, a week. I rest on Sundays. I believe that rest is just as important as work—perhaps more so.

In order to make writing a priority, I had to get rid of some other activities. Years ago, when I was struggling with finding time to do everything I thought I needed to do, I complained to the Lord. Well, instead of the sympathy I expected from Him, He gave me a loving reprimand, LOL! He said, “MaryAnn, you always have enough time to do what I have called you to do.”

His response got me thinking. Since what God says is always true, I was either disorganized or spending time doing some things He had not called me to do. In my case, it was the latter. I was involved in two church ministries to which God had not called me.

So, I resigned those ministries and spent that time writing.

I consider writing as my day job. I report for work at 9 am and work until 3 pm, with a break for lunch. I get dressed and put on makeup as though I am going to a job outside my home. This puts me in a professional mindset. I also have a home writing studio where my sole focus is writing.

How do you pick the location/setting of your romantic suspense novels?
I usually choose locations with which I am familiar. For example, Miracle in Milan takes place in Milan, Italy. A small part takes place in New York City and Texas. I have been to all three places, so I have a good idea of the atmosphere of all three.
I also sometimes choose a location to which I have not been but which I would like to visit and learn more about. When I choose this option, I do extensive research about the location before I start writing.

What is one of your favorite ways to connect with readers?
I love my readers! And I love to connect with them. I am what I would call an introvert/extrovert. In other words, I love to be around people, but then I need to retreat and recharge my batteries by being alone with the Lord and with myself for a while.
But, when I’m with my readers, my attention is fully theirs. I connect with them primarily through social media, particularly Facebook. I have a private FB group called The Diorio Champions for my Reader Team and another private FB group called The Diorio Dynamos devoted specifically to my Street Team.
I also love to connect with readers through my newsletter which is a combination of personal news and writing news. My readers are like family to me. We laugh together, cry together, and pray together. I highly respect them and often ask for their advice and opinions on matters related to my writing. I have grown to love them deeply and feel their love in return. To me, they are truly the best team an author could ever want.

Miracle in Milan
When a young, female auditor discovers convincing evidence that the man she loves is an embezzler, she must choose between ruining him or ruining herself.
Amy Torelli, chief auditor for New York City-based Enson Pharmaceuticals, is assigned to audit the books of Enson’s Italian branch in the enchanting city of Milan, Italy. Having made an inner vow never to trust a man again because of her father’s betrayal, Amy finds herself falling in love with Enson Italia’s American-born Vice President, Ted McMasters. Will Ted be the one to cause her to break her inner vow?
Ted is on the run. A run from rejection. From himself. From God. Having been wounded by a father who made him feel worthless, and having been dumped by the woman he wanted to marry, Ted is determined to keep all women at bay. But will Amy be the reason he changes his mind?

Getting to Know PS Wells

Multi-published author PS Wells recently stopped by my blog to share some about her writing life. How do you pick the location/setting of your romantic suspense novels? For my novels, I take my readers to places they have never been to, and introduce them to history and activities they have not experienced. For instance, in […]