More in-depth descriptions of these books can be found on the ACFW Fiction Finder website. 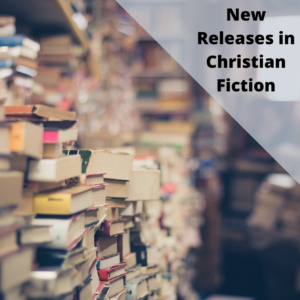 Claiming Canaan: Milcah’s Journey by Barbara M. Britton — When the tribal elders make marriage a requirement for claiming her land, Milcah bat Zelophehad must find a betrothed straightaway. The only problem in finding a husband is that all her suitors were slain while conquering the land of Canaan. Men avoid her in order to stay alive. After praying to God to send her a bold suitor, a man from her father’s clan plummets from a tree right on top of her. Is this God answering prayer, or a foolish antic by Eli, the war-scarred brother from one of her clan’s rival families. Will settling in Canaan sort out Milcah’s troubles, or have her woes just begun? (Biblical Fiction from Harbourlight Books [Pelican])

Ryan’s Father by June Foster — The rippling influence of Ryan Reid’s less than moral mother and absent father made a mark on his soul. Yet everything changed when the young school teacher accepted Christ—almost everything. An earthquake hurls the beautiful Sandy Arrington into his life, tossing his world upside down. When God calls him to build an annex for needy teens at his church, Ryan must face the carefully guarded secret he’s held deep in his heart. Though Sandy falls in love with him, Ryan’s forbidden affections lie elsewhere, and he must depend on the Lord to see him through a struggle he always hoped he’d never have to face. Sandy’s wealthy cardiologist father and the battle Ryan is powerless to win are hurtles to their romance. Can he dig his way out to find Sandy’s love? (Contemporary Romance from Winged Publications)

The House at the End of the Moor by Michelle Griep — What Can a London Opera Star and an Escaped Dartmoor Prisoner Have in Common? Opera star Maggie Lee escapes her opulent lifestyle when threatened by a powerful politician who aims to ruin her life. She runs off to the wilds of the moors to live in anonymity. All that changes the day she discovers a half-dead man near her house. Escaped convict Oliver Ward is on the run to prove his innocence, until he gets hurt and is taken in by Maggie. He discovers some jewels in her possession—the very same jewels that got him convicted. Together they hatch a plan to return the jewels, clearing Oliver’s name and hopefully maintaining Maggie’s anonymity. (Historical Romance from Barbour Publishing)

Spies & Sweethearts by Linda Shenton Matchett — A secret mission. A fake bride. A run for their lives. According to the OSS training manual, the life expectancy of a radio operator in Nazi-occupied France is six weeks. Partnered with one of the agency’s top spies, Gerard Lucas, newly-minted agent Emily Strealer plans to beat those odds. Then their cover is blown and all bets are off. The border to neutral Switzerland is three hundred miles away-a long way to run with SS soldiers on their heels.
Will Emily and Gerard survive the journey and get home? And what about their hearts? Nothing in the manual prepared them for falling in love. (Historical Romance from Shortwave Press)

Devyn’s Dilemma by Susan G Mathis — 1910, Thousand Islands, New York. Others may consider The Towers castle on Dark Island an enchanting summer retreat, but to Devyn McKenna, it’s a prison. Yet as she works as a maid for Frederick Bourne, former president of the Singer Sewing Machine Company, her life blossoms under the kindness of his family and fascinating entrepreneurs such as J.P. Morgan, Thomas Lipton, and Captain Vanderbilt. But more than anything, the growing friendship of Mr. Bourne’s valet, Brice McBride, begins to pry away the painful layers that conceal Devyn’s heart. Brice is drawn to the mysterious Devyn even though he’s certain she’s hiding a secret, one far more dangerous than the clues they find in The Towers that hint of a treasure on the island. When Devyn is accused of stealing Bourne’s investment in Vanderbilt’s New York City subway expansion, he might not be able to protect her. (Historical Romance from Lighthouse Publishing of the Carolinas)

A Life Renewed by Olivia Rae — In 1554, Lady Jane Grey, “The Nine Days’ Queen” was executed for high treason. But what if, instead of feeling the blade on her neck she secretly survived? Escaping execution, Lady Jane hides as a peasant girl in a principality in Germany. She loves the simple life and never wants to return to England. But her benefactor, a power-hungry German prince, wants to march on London and place her on the English throne again, thereby increasing his dominance in Europe. If she doesn’t agree to his plan, her beloved childhood nurse will be put to death. Desperate for help, Jane must put her trust in the mysterious spy Asher Hayes. Asher Hayes is done rounding up Protestants for “Bloody Mary” and wants nothing more than to live a quiet life as a farmer and expunge the blood of many from his hands. Except Queen Mary isn’t done with him yet. She throws his father, mother, and sister into prison on false charges in order to force him to accept one last mission – find and kill Lady Jane Grey. But when Asher discovers Lady Jane isn’t a threat to the throne as he believed her to be, he faces a devastating decision – does he sacrifice his family for the woman who reigns in his heart? (Historical Romance from HopeKnight Press LLC)

The Chisholm Trail Bride by Kathleen Y’Barbo — Stubborn Hearts Clash on a Cattle Drive Eliza Gentry’s pursuit of marriage to the son of her family’s sworn enemy has cost her greatly. Furious at his daughter’s choices, her father sends her off with the cattle drive heading toward Fort Worth and the Barnhart ranch, but under the watchful eye of Wyatt Creed, a Pinkerton man he has hired to see to her safety. With danger at every turn—not the least of which to his heart—can Wyatt Creed keep his focus with Eliza Gentry around? Is the Chisholm Trail a place for falling in love or a place to die at the hands of cattle thieves? (Historical Romance from Barbour Publishing)

Cooking Up A Mystery by Gail Pallotta — In this romantic mystery Laney Eskridge battles insecurities, loss and a criminal who attempts to destroy her tea house and catering business. (Cozy Mystery from Inspired [Prism Book Group])

Flight Risk by Cara Putman — Savannah Daniels has worked hard to establish a small law practice, and her early career gambles have paid off with a life that she loves. Jett Mason Glover has almost reached the pinnacle of the journalism ladder in Washington, DC. He just needs one breakout story to seal his destiny. When a plane crashes into the 14th Street Bridge during take-off from Reagan National, everyone thinks it’s a freak accident—until the passenger list is released and the black box is compromised. Savannah does not expect to be connected to the crash until she learns her ex-husband was piloting the plane. She must manage his estate while his name is under a fog of accusations leveled by a journalist named Jett who now claims he wants to help Savannah find the truth. As the threads untangle, Savannah begins to question what she knows and whether she’ll survive the investigation. Maybe she’s as deceived as everyone else, but someone believes she’s closer to the truth than she is. And that belief may just kill her. (Romantic Suspense from HarperCollins Christian Publishing)

Border Breach by Darlene L. Turner — When drugs are smuggled across the border, it’s their duty to stop the culprits…at any cost. Forming a joint task force, Canada border officer Kaylin Poirier and police constable Hudson Steeves have one objective: take down a drug-smuggling ring trying to sell a new lethal product. But when the smugglers come after Kaylin and Hudson, this mission becomes more than just a job. Can they live long enough to solve the case? (Romantic Suspense from Love Inspired [Harlequin])

More in-depth descriptions of these books can be found on the ACFW Fiction Finder website. Contemporary Romance:  How Sweet It Is by Robin Lee Hatcher — A businessman trying to reconnect with his brother returns to his hometown and rents the apartment where his great-great-grandparents lived during the late 1920s. He never suspects his attractive […]

More in-depth descriptions of these books can be found on the ACFW Fiction Finder website. Contemporary Romance: Forever Home by Amy Grochowski — A Canadian Amish farmer proposes a convenient marriage to a Lancaster Amish businesswoman so they can join a new community welcoming married couples only. They are both surprised when a Prince Edward […]

May 2020 New Releases in Christian Fiction

More in-depth descriptions of these books can be found on the ACFW Fiction Finder website. Children’s: The Edge of Everywhen by A.S. Mackey — Begin with an ancient, mysterious, self-aware book. Add two heartbroken children, reeling from the loss of their mother. Mix in a cantankerous aunt, dreams that see the future, and a father […]